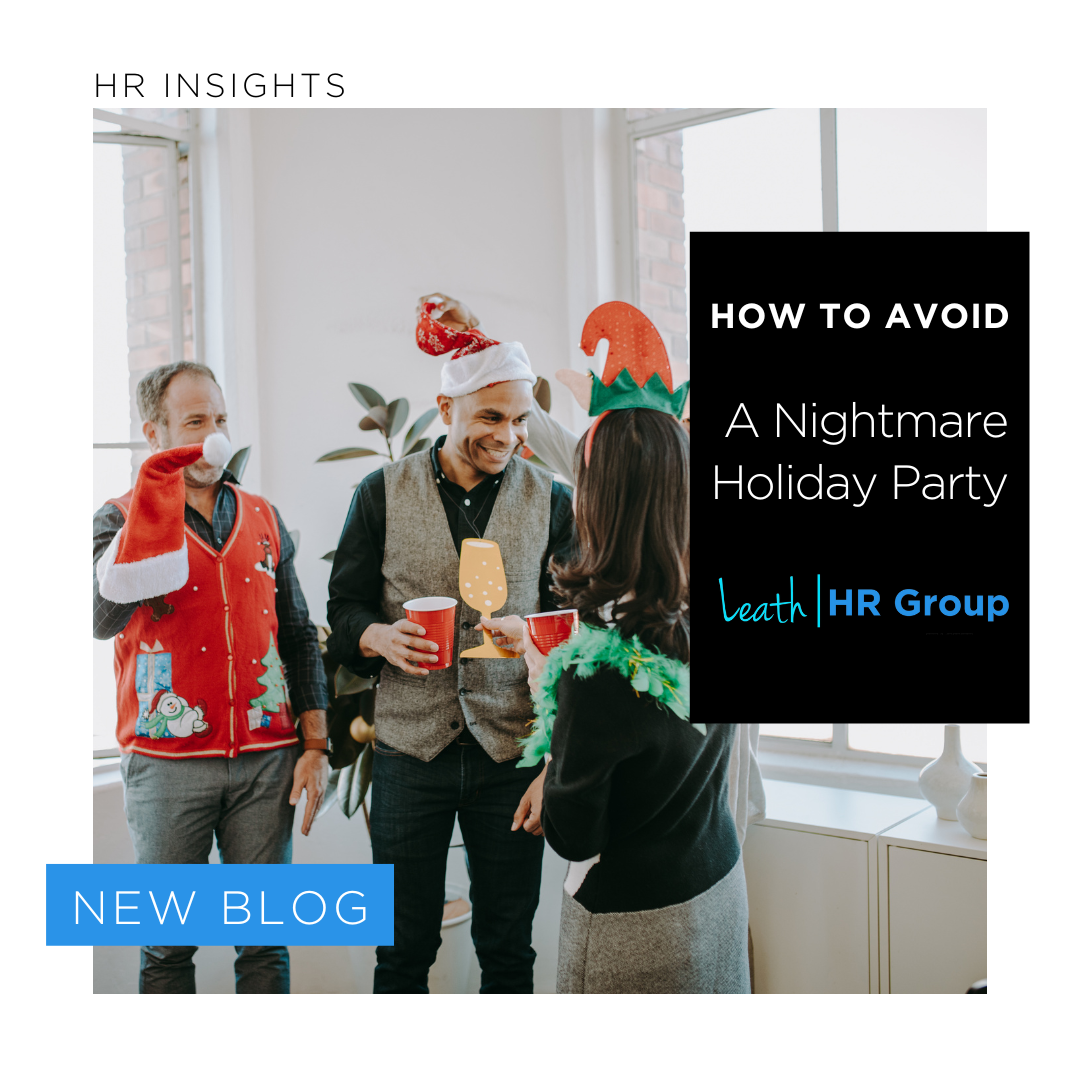 “Have fun but not TOO much fun,” said my mother 1,000 times in my life. It’s a great quote for anyone hosting or attending a company-sponsored holiday party this season. There are lots of reasons to throw an end-of-year party: you want to show employees you appreciate them, you want folks to let loose and enjoy each other and it’s a great chance to share a summary of this year’s company accomplishments. But what happens when you mix booze, the holidays and co-workers?! Hopefully nothing, but you’ll have to be intentional about party plans, so your holiday party doesn’t become an HR Nightmare.

Ask employees what they want to do with a budget.  It’s important to spend your dollars wisely and there’s nothing worse than throwing an event that employees don’t appreciate, or worse, don’t even show up to. Do a simple survey to ask if employees would like to include families or would they prefer to invite adults only. Would they like to have it at work or somewhere offsite? What date/time works best for the majority of employees? Simply asking for input can be a morale booster in itself. If you really want to go wild, get a volunteer team of cross-department employees to plan the event!

Kick it off with something productive like a teambuilding activity.  If you want the event to be fun but also recognize efforts that contributed to business success, consider spending 30 minutes on a teambuilding activity. Having party goers guess revenue numbers, number of clients earned/retained, etc. can be an educational exercise that broadens understanding of the business.

Eat, drink and be merry.  You may want to consider skipping the open bar this year. Instead, give out two tickets per guest to be redeemed for alcoholic beverages, then additional drinks may be purchased on their own. This won’t completely relieve the company of all liability if something goes bad due to intoxication, but it will support your intention to maintain a level of sobriety at the event. If someone imbibes excessively and subsequently acts in poor conduct, you (or someone who is designated to handle issues) will need to get them to leave. But, don’t let them drive themselves home; get them a ride!

Be prepared to pay for a few taxis, Ubers or Lyft rides.  If you intend to make a speech, this is a great time to let people know that the company is prepared to pay for a ride home from the party for anyone who wants it. “No judgment, just ask for the lift!” This will encourage people to be safe because “buzzed driving is drunk driving,” and let’s face it, you need these folks back to work on Monday!

Consider #MeToo impact.  Appoint two or three people to be responsible parties at the event. These are people who are sober and have authority to address any HR nightmares like people who share inappropriate jokes, make others feel uncomfortable or are overly intoxicated. By allowing employees to invite a guest (i.e., spouse/girlfriend/boyfriend) you’re sure to cut down on inappropriate behavior because people tend to behave themselves if their significant other is around!

The after party can be considered an extension of your company party.  Inappropriate behavior is more likely to happen at an after party when people are in full-on party mode.  In order to mitigate liability, don’t allow company leaders to pay for people’s drinks and/or food at the after party! Before the company-sponsored event ends, the senior leader can make an announcement, “thank you for attending. If you choose to go out afterwards, please stay safe – don’t drink and drive.” Then, shut the event down at the company-sponsored location so people can make a choice to go home, to another restaurant, bar, house or wherever, and it will be independent from your event.

Next day complaints.  If you or others on the leadership team receive a complaint about an incident or behavior from the holiday event, you must investigate. No matter how trivial or egregious, do the due diligence and follow the policy outlined in your handbook to look into the matter at hand. Once complete, close the loop with those involved.

Happy holidays and avoid a nightmare holiday party by being prepared! Cheers!